Yessah! Today I'm replacing my starter with one that will actually start when my car is hot. Hold on, my car always looks hot, I mean: when the engine is hot! ;-)

Here's some science for you to understand why the old starter sometimes doesn't crank well when the engine is hot: The original starter has a LOT of copper wire inside that make up the coils required to create a magnetic field. A lot of copper makes it a strong magnet when current flows through the copper but as the temperature of copper rises, its electric resistance increases. The increase can actually be so much that less current can flow through the copper and... less current = less power. And when there's not enough power to crank, the starter will tell you with a lovely whining noise.

So here it goes! 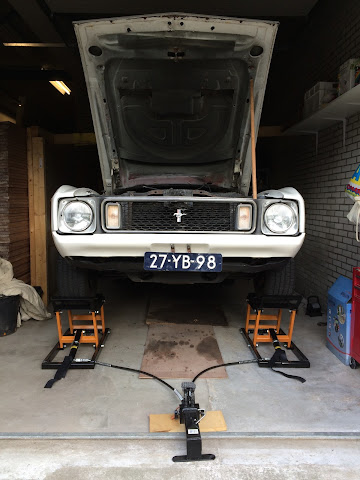 A month ago I got myself these bad boys to lift my car up, freakin' awesome when you don't have a carlift or are limited in other ways. I had to first drive it up there because I don't have enough space to push all 1600 kilos up... Then I used the footpump to lift the car. Don't forget to put your car in neutral because while lifting it, it will also be pushed back a fair bit and if it can't move freely you get tension in your tranny and you don't want that.
When the car was up, I disconnected the battery. 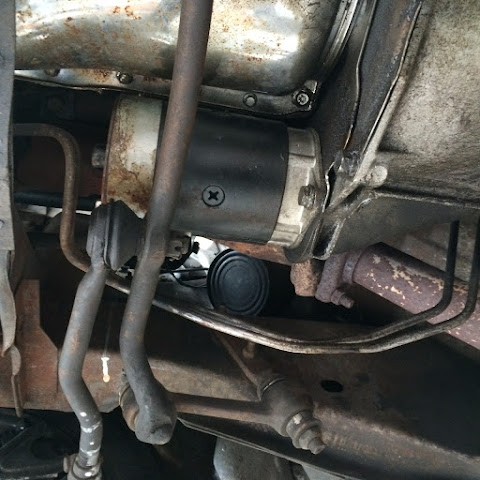 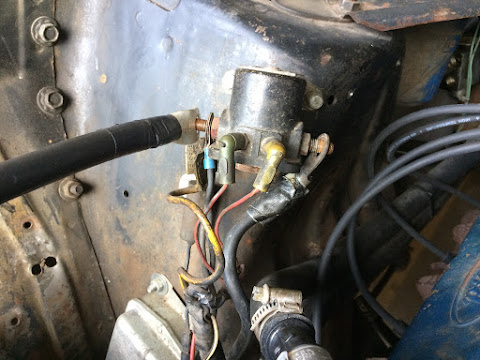 Back to the electronics. This is the fender solenoid. It's purpose is to switch the high current needed for a starter motor. The thick cable on the left is attached to the positive lead from the battery. The one on the right leads to the starter. Because the new starter has its own solenoid the thick cable from the right will be moved to the left and the other end will be input for the starter-solenoid. 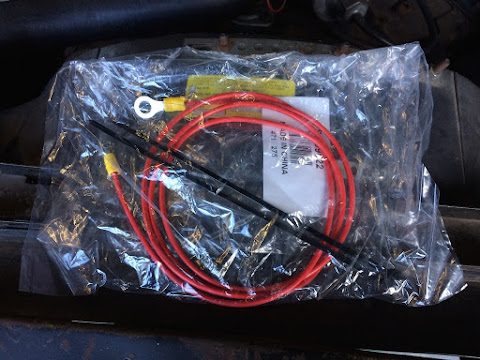 This is the ignition cable that came with the starter. 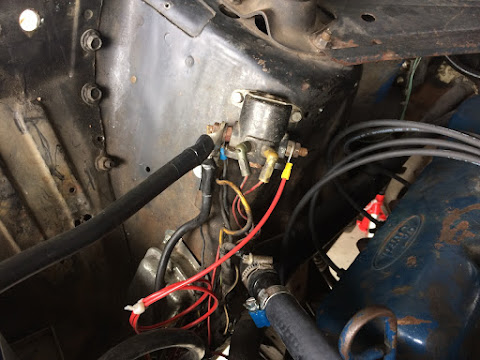 The new thinner cable will be used to re-direct the ignition switch to the starter solenoid. The thick cable that was on the right is now on the left. 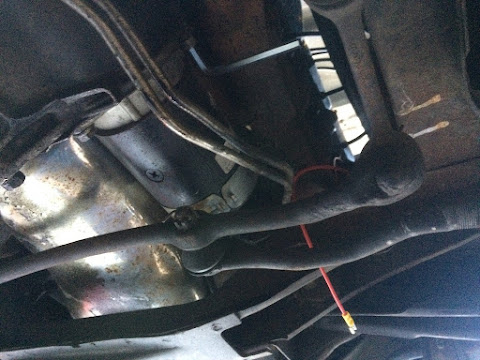 Lead the red cable down aside the thick cable that's already there. 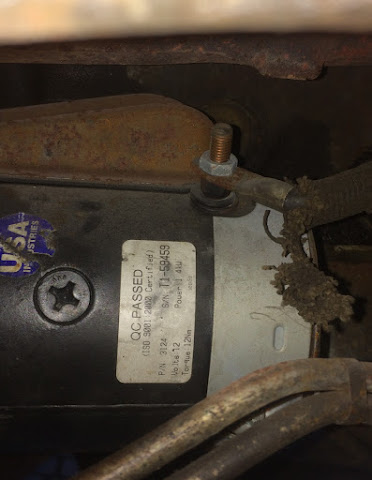 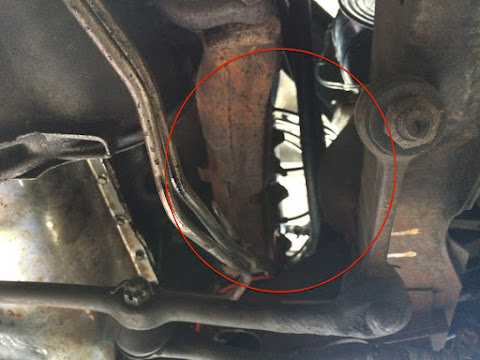 Anyways, look, it's gone! One of my biggest concerns was how I'd actually get the starter out of there. Well, it fits through the gap in this red circle. 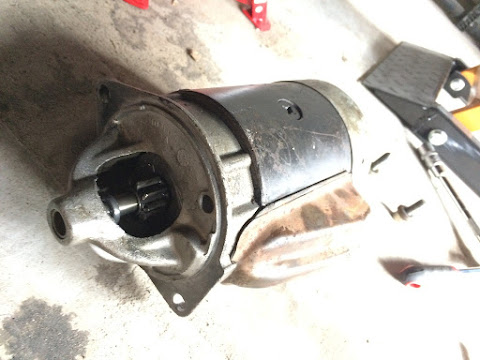 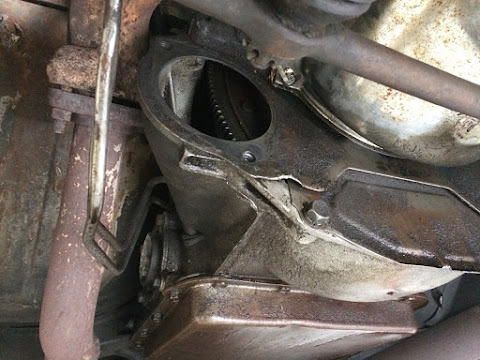 Peekaboo! You can now see the teeth on the flywheel. 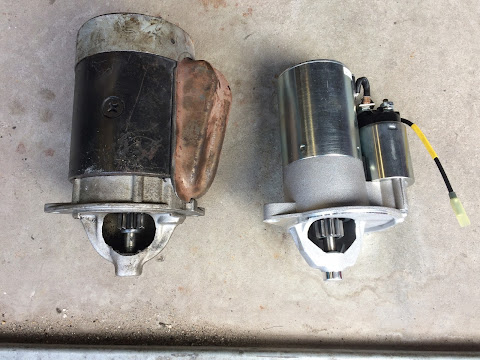 Here is a picture to see the differences in size. 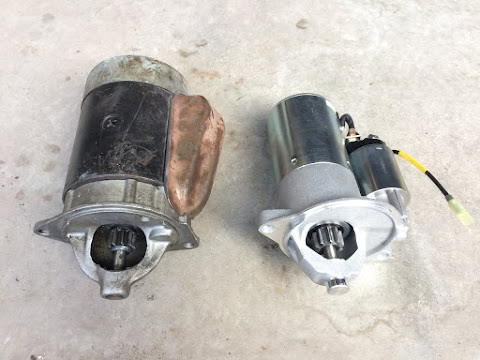 From a slightly different angle as well ;-) 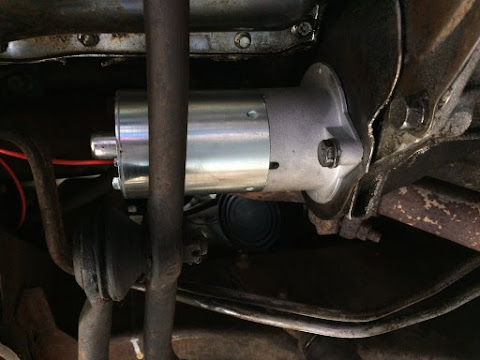 Bolting in the new starter is easy-peasy. The one I got from DB Electrical fits perfectly! 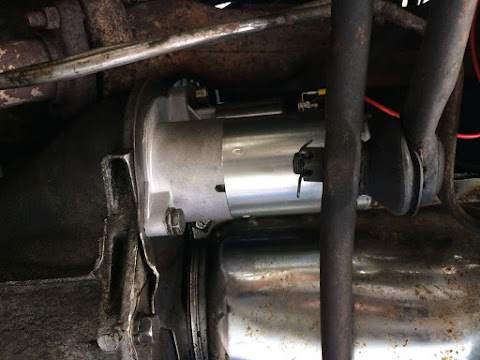 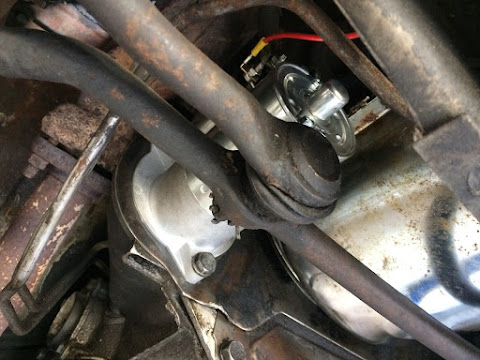 The hardest part was attaching the thick cable because I want to keep it away from the exhaust as much as possible but as you tighten the bolt it keeps rotating towards the exhaust.

When I tested it I had to get used to the new starting noise, it's quite different from what I'm used to. But it started well and powerful.


Mission accomplished!
Posted by Vincent at 17:27